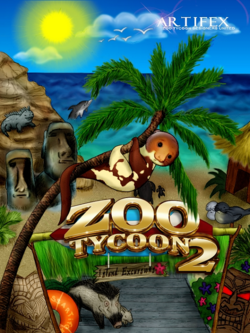 Zoo Tycoon 2: Island Excursions was a user-made expansion pack released for Zoo Tycoon 2, released in 2008 and developed by Artifex.

A booster pack was released by Tamara Henson in 2011, including three animals that were originally to be included in the expansion but were never finished by Artifex.

The main pack can be downloaded from User-Made Creations with a registered account from the various links here!

The booster pack can be downloaded from User-Made Creations with a registered account here!

This patch moves the Vancouver Island Marmot and Pacific Silver Fir from the Downloaded Content to the Island Excursions filter and adds the expansion's icon to their icons since Artifex applied it manually to this pack.